Manitoba Ombudsman has released its investigation report on the City of Winnipeg’s Handi-Transit service, now called Transit Plus. The service provides transportation for approximately 7,500 clients who are unable to use the fixed-route transit system because they are legally blind or have a physical disability that significantly impairs their mobility.

The ombudsman initiated the investigation in response to a complaint from the Independent Living Resource Centre, a Winnipeg-based organization that supports people with disabilities, many of whom use the city’s Handi-Transit service.

“We know that by undertaking an investigation such as this one, where we looked at multiple issues in a large program, we have the potential to positively impact many people,” said Acting Ombudsman Marc Cormier. “This was a significant investigation for my office, and I would like to thank Handi-Transit staff for their cooperation throughout it. I’d also like to thank the Independent Living Resource Centre for bringing these issues to our attention.”

Overall, the ombudsman found that in many instances, Handi-Transit provides a reasonably equivalent service to fixed-route transit, but in certain areas falls short. The ombudsman made 19 recommendations to improve the service, including that the city:

The city accepted all 19 recommendations, and has taken steps to implement some of them, such as changing the membership of the appeal hearing body and working on a user guide. Other recommendations, such as broadening the eligibility criteria for service, will be further studied and would ultimately require funding and council approval.

The report is available on the ombudsman's website at www.ombudsman.mb.ca/uploads/document/files/case-2016-0057-en.pdf 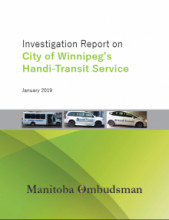