Manitoba Ombudsman does not publicly release investigation reports under PIDA in order to maintain a high degree of confidentiality, due to the sensitive and serious nature of this work. The office undertook a 10-year review to provide more information to the public about the act and the work of Manitoba Ombudsman.

“Manitoba’s whistleblower legislation came into effect in 2007. Our office decided to look back on its first decade in operation and report publicly on what we have seen as far as themes and trends,” said Paquin. “With the 10-year anniversary and changes to the act, the timing was right to share more information with Manitobans.”

Under PIDA, the ombudsman investigates disclosures of wrongdoing. A wrongdoing can be a very serious act or omission that is an offence under another law, an act that creates a specific and substantial danger to the life, health, or safety of persons or the environment, or gross mismanagement, including the mismanagement of public funds or government property.

The report is available in English and French on the ombudsman’s website at www.ombudsman.mb.ca. 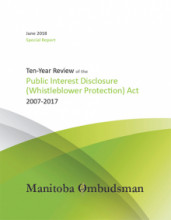